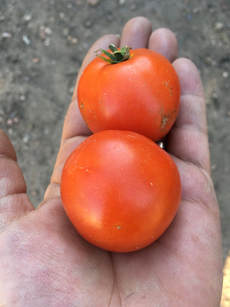 An old English heirloom. Small to saladette sized, 2-5 oz. bright red beauties. Rugose leaves on a very giving dwarf plant. Grows only to about 3'. Nice and tidy for such an early tomato. This plant gives many flushes - it doesn't want to stop. Great sweet flavor with beautiful fruits. They are ultimately redder than the pic. Very Early!

An English Family Heirloom - grown by D. Rankilor whose brother Cyril grew it on his allotment before he died. Then given to The Seed Ambassador's Project by the Heritage Seed Library England. On to the Seed Savers Exchange to me.